On Tuesday, January 15, 2019, Clemens Cornielje, King’s Commissioner in Gelderland, along with Nelly Kalfs, chief engineer and director of Rijkswaterstaat Oost-Nederland, unveiled an impression of the future connection of the A12 motorway at Zevenaar-Oost to BusinessPark 7Poort.

The impression shows the situation of the A12 motorway on which Rijkswaterstaat, the municipality of Zevenaar and ProRail will work in the coming years. The visualization shows the future junction A12 Zevenaar-Oost, but also the underpasses for slow traffic, the changes to the Hengelder road and the doubling of the tracks towards Doetinchem.

Cornielje has always been a great champion of the ViA15 project. Shortly before his departure as King’s Commissioner, he wanted to talk once more with local entrepreneurs, municipal authorities and Rijkswaterstaat about regional economic developments and the importance of widening the A12 and the A15 motorway and extending the A15. Cornielje emphasized in the meeting the importance of the project for the Liemers and Gelderland and his involvement: “I have spent my entire management period as a Commissioner with the extension of the A15. There is considerable political support at the moment. There is broad support from all parties. “The meeting took place during an informal breakfast at Nathan’s. 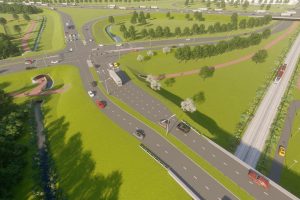 Widening of the A15 motorway

The government and the province of Gelderland will extend the A15 12 kilometers and connect it to the A12. This creates a direct connection between the port of Rotterdam and Germany. This expansion of the road network and the widening of the A12 and A15 also improves regional traffic flow. As a result, road users travel faster between Nijmegen / Arnhem, the Liemers and the Achterhoek. This benefits the regional economy and employment. The ViA15 project is currently awaiting the handling of the decision on the route decision by the Council of State. The traffic is expected to be able to travel on the new road for the first time in the period 2022-2024.